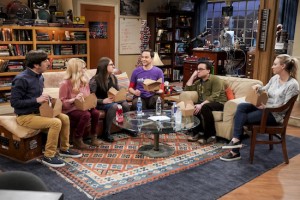 When Howard and Bernadette turn to Sheldon for help dealing with a zoning problem in their neighborhood, he discovers they have issues in their own backyard. Meanwhile, Leonard is jealous when Bert asks Raj to help him inspect a meteorite.

1213 - The Confirmation Polarization
Next Episode

Howard: And then Andy said if we want privacy, we should plant some trees. The only way I know how to do that is to give a dollar and tree shows up in Israel.

Stuart: Whoa, whoa. You're not gonna cut open a meteor, are you? Have you not learned anything from comic books? Space viruses? Pod people? I sell nothing but warnings.

Raj: Calm down, Stuart. You're being a little crazy.
Denise: Oh, is he? Is he being crazy? Or is he the only one around here who's making any sense?
Raj: It's nice they found each other.

Bert: I don't really have dreams, when I sleep or in life.

Stuart: Yeah, this one made me go for ice cream and talk about her day. Spoiler alert: it was fine.
Amy: It wasn't fine. I got trapped in an elevator.
Sheldon: I may have missed a few details. The bottom of my cone was drippy.

When Howard and Bernadette go out to use their hot tub, they trigger the motion-activated flood lights their new neighbor has installed which completely illuminate their deck. Howard is undeterred, but Bernadette doesn’t want to take her clothes off under a spotlight. When the new neighbor, Andy, starts chatting to them, they point out his new balcony looks right over their fence. After the light goes out, Howard suggests they make motionless love.

In Leonard’s lab, Howard tells the guys about his neighbor invading his privacy. Sheldon wants to change the subject to his Nobel Prize crisis, even though nothing’s changed since the last time they discussed it. After Leonard reminds them they came here to check out it his new cool laser, Sheldon decides to go wait in the car. As Leonard starts to talk about his laser, Howard switches the conversation back to his neighbor. Bert comes to ask Raj for help with a meteorite he found which may contain organic matter. When Howard leaves with Raj to go check Bert’s meteorite, Leonard still thinks his laser’s cool even if nobody else stuck around to see.

When Howard and Bernadette go to the city zoning office, they explain their neighbor put up a balcony that looks right into their backyard and they were wondering if there’s anything they can do about it. The clerk explains they will need to fill out a form to check whether the neighbor has the necessary permits and then determine which of three other forms they need to file a complaint.

After Leonard sneezes as he browses comic books at the store, Stuart asks if he’s okay. Leonard insists it’s just allergies. When Raj arrives, he tells Leonard that he and Bert did a spectrographic analysis on the meteorite and there’s definitely something going on inside. Leonard proposes using his new laser to cut it open, but Raj explains that Bert has a water-cooled diamond-bladed saw he is planning on using. Stuart is alarmed that they’re considering cutting open a meteor when it could unleash space viruses or pod people on the planet.

As the gang eat dinner in the apartment, Howard fills them in on the day he and Bernadette had down at the city planning office without solving a thing. Sheldon is envious of the time they’ve spent dealing with bureaucracy. Since Sheldon likes this stuff so much, Bernadette suggests he come and do it with them. When Bernadette asks where Raj is, Leonard explains he’s probably with Bert cutting open that “stupid” meteorite with their “stupid” diamond-saw. As Leonard gets snuffly again, Amy asks if he’s okay. Leonard condeces he’s a little run down and might have a cold. After hearing that, Sheldon, Amy, Howard and Bernadette trapse across the hall. As they file into Sheldon and Amy’s apartment with their dinner, he squirts Purell into their hands.

Back in Apartment 4A, Leonard admits to Penny it’s frustrating that Raj and Bert won’t listen to him as he knows his laser would be much more efficient. Penny wonders if Leonard isn’t a little jealous, but he insists he’s not and that his way is just better. When Penny tells him to go to bed, he says he’ll sleep out on the couch and she can have the bed to herself.

When Howard and Bernadette ltake Sheldon and Amy out onto their deck, he thinks their neighbor’s balcony is a textbook case of encroachment. Sheldon asks about the setback on property lines in the neighborhood, but Bernadette doesn’t know. When Sheldon says it should be on the permit from when they built the deck, Bernadette admits her dad built it without going through the proper channels. Sheldon is alarmed that he’s stood on an unpermitted deck. He’s even more aghast to learn they never had their bathroom renovation inspected.

As Amy drives home with Sheldon, he is still upset about Howard and Bernadette and questions whether he really know them anymore. Sheldon calls them rule breakers and wants to teach them a lesson by turning them in to the planning authority. Amy begs him not to do that as being made to rip out their renovations would destroy his friendship with Howard and Bernadette. Meanwhile, a sickly Leonard goes to Bert’s geology lab to talk to them, but they’re not in. When he sees the meteorite next to Bert’s saw, he picks it up and tries to carry it away. It’s too heavy so he wheels it out on a chair instead.

As Sheldon stands in line at the planning office, he points out the typo to another person waiting. When he reaches the counter and talks to the clerk, Sheldon asks if should turn somebody in if he knows they are in violation of the building code. Sheldon mentions that Confucius said we owe a greater responsibility to people we’re close with than the wider society, while Socrates thought people should obey all laws - even unjust ones. The clerk tries hard not to take a position on Sheldon’s dilemma.

Bert and Raj arrive at Leonard’s lab and find him about to use his laser on their meteorite. They warn him to to stop as whatever’s inside the meteorite is dangerous, but Leonard carries out and splits it in two. As Leonard looks at the purple light emanating from the meteorite, it sprays a substance in his eyes. Leonard’s eyes turn people, he says he feels hungry and he starts eating Bert and then Raj. Back in the apartment, Penny wakes Leonard up from his bad dream. After Penny says he’s running a fever, Leonard’s eyes turn purple and he starts biting her arm. Leonard wakes up on the couch screaming as Penny walks into the room. When he asks what color his eyes are, Penny isn’t sure. Leonard is relieved to actually be awake this time.

As Howard cleans his hot tub, Bernadette brings Sheldon out to see him. Sheldon explains he went down to the code office to turn them in, but he didn’t do it. He realized the unwritten rules of friendship are more important than planning law. While he was there, he did determine that their neighbor’s balcony is infringing on their property line. He had all this pent-up snitch energy so he reported their neighbor, who is going to have to take down his balcony.

When Leonard goes to see Raj and Bert, Raj tells him again they don’t want to use his laser. Leonard says he came to apologize for yesterday. Raj is surprised when Leonard admits he was feeling jealous of the pair of them. When Leonard tells them about the crazy dream he had, Bert is pleased to hear Leonard ate him first. Elsewhere, Howard and Bernadette drink wine out on their deck as they listen to the noisy deconstruction of their neighbor’s balcony. When Andy shouts to ask if they know a Sheldon Cooper, Bernadette insists they do not.

Howard and Denise wonder why nobody has been in the comic book store for hours. When Denise looks out and sees nobody in the street either, she asks Stuart if he’s thinking what she’s thinking. Stuart wonders if they cut that meteorite open and unleashed a space plague. As Stuart quickly locks up the store, he says if they’re the last two people alive they might have to rebuild civilization. After Stuart says it might be up to them to repopulate the earth, Denise is okay with that and decides to go brush her teeth in preparation. When Sheldon knocks on the store door, Stuart tells him they’re closed.