210 - The Vartabedian Conundrum Next Episode 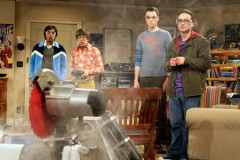 Sheldon: All I need is a healthy ovum and I can grow my own Leonard Nimoy.
Penny: Okay, all I'm giving you is the napkin, Sheldon.

Penny: Now, honey, it's okay. You don't have to get me anything in return.
Sheldon: Of course I do. The essence of the custom is that I now have to go out and purchase for you a gift of commensurate value and representing the same perceived level of friendship as that represented by the gift you've given me. It's no wonder suicide rates skyrocket this time of year.
Penny: Okay, you know what? Forget it. I'm not giving you a present.
Sheldon: No, it's too late. I see it. That elf sticker says to Sheldon. The die has been cast, the moving finger has writ, Hannibal has crossed the Alps.

Sheldon: If I would give you this gift basket, based on that action alone and no other data, infer and describe the hypothetical relationship that exist between us.
Store Clerk: Excuse me?
Sheldon: Here. Now, are we friends? Colleagues? Lovers? Are you my grandmother?
Store Clerk: I don't understand what you're talking about and you're making me a little uncomfortable.
Howard: See? Sounds just like you and Penny. We'll take it.

Leonard: By the way, my leg is killing me. Thanks for asking.

The guys spot David Underhill, the university's cool and hunky star physicist, in the cafeteria and are surprised when he wants to work with Leonard. Returning from work, Leonard is enthused about working with the good looking physicist. Penny drops by to talk about Christmas presents, inviting an earful from Sheldon who does not appreciate the obligation put upon him by reciprocal gift-giving.

After Leonard is injured by Dave's stationary motorcycle, Dave helps him up the stairs to his apartment where he meets Penny. Penny is instantly charmed by Dave and agrees to go see his lab. Elsewhere, Sheldon is searching for a gift for Penny with Raj and Howard's help.

At the university cafeteria, Leonard is surprised to find Penny there taking up Dave's offer of a guided tour. Back at the apartment, Howard and Raj do the bulk of the lifting when Sheldon decides to buy an array of gift baskets of varying size as a fool-proof way to ensure he gives Penny a gift of commensurate value. Worked up that Penny has decided to date a genius - just not him, Leonard goes to Penny's apartment. After he angrily questions her, Penny breaks down sobbing because Dave turned out to be married. They drown their sorrows in eggnog which is now mostly rum.

Later, Penny brings over her Christmas presents and gives Sheldon a napkin signed by Leonard Nimoy. Sheldon, overwhelmed by this gift, runs back to his room to get Penny's present. Unsure how he can reciprocate Penny's huge gift, he brings her all the gift baskets he bought. Worried that the gift baskets still aren't enough, Sheldon gives Penny a hug in what Leonard describes as a Saturnalia miracle.