When Penny faces financial problems, Sheldon is more than happy to lend her some money. Although Sheldon is a surprisingly reasonable lender, Penny feels uncomfortable owing him money. After Penny explains the source of her money worries to Leonard, he and the guys confront Penny's hulking ex-boyfriend, Kurt. 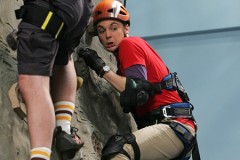 213 - The Friendship Algorithm
Next Episode 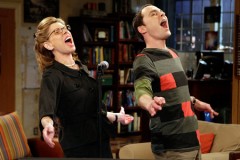 Leonard: OK, is everyone clear on the plan?
Howard: Yes, Koothrappali's going to wet himself, I'm gonna throw up, Sheldon's gonna run away and you're going to die. Shall we synchronize our watches?

Sheldon: There once was a brave lad named Leonard.
With a fi fi fiddle dee dee.
He faced a fearsome giant.
While Raj just wanted to pee.

Leonard: Sheldon, would you be prepared on a non-presidential basis, to create an emergency ad-hoc slurpee/icee equivalency?
Sheldon: Oh Leonard, you know I can't do that.

Penny: What are you saying? That I'm using my body to get dinner? That I'm some sort of Chinese food prostitute?

Raj: If anyone cares, I still have to pee.

Penny rushes into Sheldon's apartment in a bid to hide from the landlord. When Penny explains she's behind on her rent, Sheldon offers to lend her money and explains that she can just pay him back whenever she's able. The next day, Penny snaps at Sheldon when she receives a parcel (a beret she ordered a month ago), even though Sheldon didn't say a word about it. Later that day, Penny feels defensive and snipes at the guys when they comment on her getting free food. Penny reassures Sheldon that she will pay him back soon, though Sheldon did not bring up the issue. When Sheldon offers to lend her more money, Penny leaves in a huff.

Leonard goes over to see what's troubling Penny, who is sitting in the dark as she couldn't pay the electric bill. Leonard mentions to Penny that Sheldon really doesn't care when he gets the money back and that it's one of his few positive idiosyncracicies. When Leonard suggests a few areas that Penny could cut back on, she admits the reason she's so out of pocket is that she paid a fine for her ex-boyfriend Kurt. Leonard tells her she should demand her money back from him.

Leonard returns to the apartment and asks the guys to join him on a quest to get Penny's money back from Kurt. The other guys are understandably nervous about confronting Penny's hulking ex, but Leonard eventually convinces them. When they arrive at Kurt's door, the other guys hide in the background while Leonard confronts Kurt. After Leonard tries a second time - alone - to get Penny's money, he returns with indelible ink on his head detailing Kurt's debt to Penny.

Penny visits Leonard, who is wearing a hat to hide the ink on his forehead, to tell him that Kurt paid the money back, out of the blue. Leonard presses her to see if Kurt mentioned why he decided to pay her back, but Penny thinks he's changed and is going to meet him for dinner. Although Leonard didn't get the bounty he was expecting, Sheldon was proud of him. "There once was a brave lad named Leonard. With a fi-fi fiddle dee-dee. He faced a fearsome giant. While Raj just wanted to pee."