Penny gets more than she bargained for when Leonard agrees to meet with a psychiatrist
on her behalf. Also, Sheldon and Koothrappali collaborate on an astronomical discovery, and Wolowitz and Bernadette can't believe what they are feeling after Stuart moves out.

911 - The Opening Night Excitation Next Episode 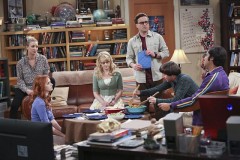 Sheldon: Perhaps I should explain. While working with Koothrappali, we discovered an asteroid, and I named it after you.
Amy: Oh, Sheldon, thank you. That's so romantic. But what about Rajesh? He was okay with you choosing the name?
Sheldon: Well, it took a little negotiating, but I wore him down. Uh, we get the asteroid, and if you and I have children, they all have to be named Rajesh.
Amy: All of them?
Sheldon: Even the girls.
Amy: Okay, I think I know what to say now.

Howard: You know, once we get the house back to ourselves, we can be romantic in any room we want.
Bernadette: Great. I can finally show you where the laundry room is.

Raj: Come on, a medium-sized asteroid is still an interesting discovery.
Sheldon: I suppose it could end up on a collision course with Earth and destroy life as we know it.
Raj: You dream different than me.

Leonard: You know what'd be nice? Name it after your girlfriends. Show them how much you care.
Raj: That is a great idea.
Sheldon: It's perfect. It appears romantic, but it's really just a rock in space that gets me out of Valentine's Day forever.
Raj: So, uh, what were you thinking? Combine their names?
Sheldon: I like it. Yeah, we'll take the "Am" from Amy and, uh, the "Y" from Emily.
Raj: That's just Amy.
Sheldon: Exactly. See how well we work together?

Sheldon is on a video chat with Amy, who has made it safely to her hotel in Detroit. After Amy tells him she should go unpack, Sheldon tells her to enjoy the neurobiology conference. When the guys arrive back at the apartment, Sheldon tells them the good news: Amy’s at a conference all weekend so he’s available to be entertained. Howard and Bernadette are busy getting their house ready for the remodel, while Leonard was hoping for a break from Sheldon. Raj has time booked at the telescope lab and he tells Sheldon he is welcome to join him.

When Penny returns home, she tells Leonard he day at work was not great as she still can’t get in to see Dr. Gallo, who refuses to see sales reps. After Penny tells Howard the doctor is a psychiatrist, Howard suggests making an appointment with her as a patient. Since Dr. Gallo already knows Penny is a pharmaceutical rep, so Raj suggests Leonard make the appointment instead. Leonard is reluctant to waste a psychiatrist’s time and worried about what would happen if he gets caught. Leonard eventually relents and tells Penny he will do it because he loves her.

In Howard and Bernadette’s bedroom, she wishes Stuart wasn’t around so she and Howard wouldn’t need to be so quiet during their amorous activities. When Stuart knocks on the door and asks to come in, he tells them he’s going to make things easier for them during the remodel by moving out. Stuart has already found an apartment and will be leaving in a couple of days.

In the telescope lab, Sheldon is pacing around aimlessly as Raj checks the telescope’s camera. When Raj gets angry about Sheldon’s endless interruptions, Sheldon insists he can be helpful if he’s given something to do. Raj tells Sheldon there’s six months of data on a computer and asks him to look through it for any patterns or anomalies. Raj is happy to have distracted Sheldon for a few hours, until he immediately finds an optical transient.

As Leonard goes into Dr. Gallo’s office, he thanks her for seeing him on such short notice. When Dr. Gallo asks whether Leonard is any relation to Dr. Beverly Hofstadter, Leonard admits he is her daughter. Dr. Gallo says she has read all of Beverly’s books, but does not agree with her views on child-rearing at all. Leonard instantly settles down and sits on the couch to talk to her. Dr. Gallo recognises Leonard is holding onto a lot of anger about his mother, but Leonard claims he’s worked through a lot of that stuff and is better now. Still, he goes on to talk about some of his grievances with his mother.

As Howard and Bernadette carry boxes out to Stuart’s car, Howard says with the house being empty they will finally be able to enjoy themselves in every room of the house. After Stuart packs away another box and gets in his car, Bernadette tells him to let them know when he’s all settled in. Stuart says he really can’t thank them enough for taking him in. After Bernadette watches Stuart drive away, she turns around to see Howard in his underwear ready to “celebrate” in the garage.

Back in the lab, Raj tells Sheldon that when they receive the next image, they will be able to identify exactly what it is that Sheldon found. Sheldon is hoping for a new planet, ideally one with a livable environment he can rule with an iron fist. When the new image arrives, it turns out to be a medium-sized asteroid. Sheldon is somewhat disappointed, but Raj insists it’s still an interesting discovery. Raj goes on to mention that they will get to name the asteroid.

When Leonard returns home, Penny asks how it went. Leonard starts to say how Dr. Gallo is terrific, but Penny interrupts him to ask whether he helped her out. Leonard says that after he talked with Dr. Gallo about how his mother ruined his life, he told her about Penny and she said she would be happy to meet her.

As Howard and Bernadette clean up Stuart’s old room, they talk about what to do with the room. Howard was hoping for a home theater or gaming room, like a man cave, but Bernadette was thinking of a home office. After Howard mentions he hasn’t heard from Stuart since he left, the empty nesters are disturbed to realize they are missing him.

When Sheldon and Raj arrive at the apartment, Raj says he was thinking they could name the asteroid by combining their names. Sheldon thinks that’s a great idea and they should call it “Kooper”; “Koo” from Koothrappali and “per” from Cooper. When Leonard comes out, Sheldon tells him their great news. Leonard wants to talk about his great news, that Dr. Gallo made him realize he is a worthwhile person and his feelings matter. After Sheldon tells Leonard that he discovered an asteroid and gets to name it, Raj is annoyed that he’s being written out of the story. When Leonard suggests they name it after their girlfriends to show them how much they care,  Sheldon suggests taking the “Am” from Amy and the “y” from Emily.

In Dr. Gallo’s office, Penny tells her about the benefits of her company’s new drug, Placinex. After Penny wraps up by asking if Dr. Gallo has any questions, she has one: When Penny made her husband pretend to be a patient to get access to her, what was she thinking there? Penny tries to change the subject back to the drug, but Dr. Gallo would rather talk about why Penny married Leonard. Dr. Gallo says Leonard is someone who was raised by an overbearing woman who completely dominated every aspect of his formative years. She wonders whether Leonard is perpetuating that relationship by selecting a partner like Penny?

In the apartment, Sheldon starts another video chat with Amy to tell her the good news: she’s an asteroid. Sheldon explains that while working with Raj they discovered an asteroid and Sheldon named it after her. Amy thinks that’s very romantic, but she wonders whether Raj was comfortable with him choosing the name. Sheldon admits Raj took some convincing, but they settled on Sheldon naming the asteroid so long as he and Amy call all their children Rajesh.

In Dr. Gallo’s office, Penny is on the couch as she argues that if anything, Leonard is turning her into his mother. When Penny says she’s not only mother to Leonard but the man-child they have living with them, Dr. Gallo admits Leonard talked about him and she wasn’t sure whether Sheldon was real. Dr. Gallo concedes that Penny has a lot on her plate. Penny admits that Leonard was right, talking to her is really helping.

As Seldon and Amy say they miss each other over video chat, Howard and Bernadette admit they miss Stuart in his empty room, Penny tells Dr. Gallo she misses when life was simpler, and Leonard has fun as he plays jump role with some girls in the neighborhood.

While Howard and Bernadette sleep in their bed, Stuart stands over them and whispers that he really misses this.