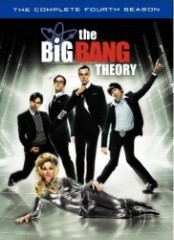 The Big Bang Theory: Season 4 was released today on Blu-ray and DVD in the United States and Canada. The two disc Blu-ray and three disc DVD boxset include all twenty-four episodes of the 2010/11 season along with these exclusive bonus features: Actor on Actor: The Big Bang's Theory of Relativity Featurette, The Barenaked Ladies on Big Bang Theory Featurette, The History of Everything Music Video and a Gag Reel. Episodes are presented in widescreen with Dolby Digital 5.1 Surround Sound (DVD)/DTS -HD Master Audio (Blu-ray). The episodes have English audio track and English, French and Spanish subtitles.

In the United Kingdom and Ireland, Season 4 is coming to DVD on Monday, September 26th. Pre-order your copy from Amazon.co.uk now. In Australia and New Zealand, the fourth season DVD and Blu-ray will be released Wednesday, October 5th.