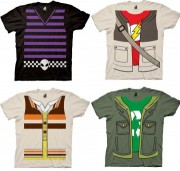 We have teamed up with StylinOnline.com to give away one of these officially licensed Big Bang Theory character costume t-shirts. Head over to the-big-bang-theory.com/win-an-official-character-tshirt/ and match the characters to the t-shirts for your chance to win.

Enter the contest now for your chance to win one of these tees!