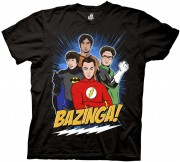 Warner Bros. and CBS Consumer Products have teamed up to launch an exclusive, limited edition line of The Big Bang Theory/Star Trek merchandise which includes t-shirts and Funko bobbleheads featuring the guys in Starfleet uniforms. The new merchandise will be available only at Hot Topic stores nationwide and HotTopic.com from now until July. Hot Topic will also exclusively stock a new, limited edition The Big Bang Theory/DC Comics t-shirt featuring the guys in their favorite DC Comics costumes.

To support the new line of merchandise, Warner Bros. has teamed up with Hot Topic to run the second annual Ultimate Fan Giveaway offering an opportunity to attend the legendary Comic-Con International in San Diego.

From May 20 through May 31, fans can enter the contest by watching The Big Bang Theory every weeknight in syndication (selected markets only) and identifying Sheldon's special Hot Topic t-shirt online at BigBangContest.com, or by visiting any Hot Topic store nationwide by Sunday, signing up to be an HT+1 rewards member and purchasing any Big Bang Theory t-shirt. Find your local Big Bang Theory listings at BigBangWeeknights.com.

The contest is open to legal residents of the 50 United States, District of Columbia and Puerto Rico who reside in specific eligible areas. You must be at least thirteen years old to enter. Get more information on the WB Media To Go website.