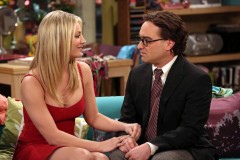 Melissa Tang has landed a guest spot as Leonard's "other" woman on The Big Bang Theory, according to TVLine.com. The actress, who had a recurring role on the Chuck Lorre series Mom, will play Mandy, the woman Leonard admitted kissing during his North Sea Expedition two years ago.

Leonard revealed his indiscretion to Penny during the Season 8 finale, "The Commitment Determination", as he and Penny headed to Vegas to get married.

TVLine reports that the actress will appear in the second episode of the season, which is set to be taped next week. The Big Bang Theory's season premiere, which is set to air Monday, September 21, was recorded earlier this week.

Read the full story at TVLine.com