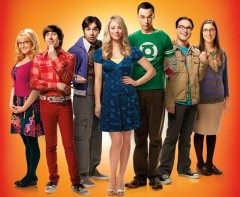 With a little over three weeks to go until The Big Bang Theory's ninth season premiere, spoilers of what to expect in the new season are starting to flow out. Here's a round-up of what's been reported over the past few days:

TVLine revealed the conclusion to Leonard and Penny's marital cliffhanger from the eighth season finale. When we last saw them, Leonard and Penny were driving to Vegas to get married, but their wedding plans were thrown in doubt when Leonard admitted kissing another woman during his time at sea.

The Force Awakens, the upcoming Star Wars movie, will be discussed on the show this season, executive producer Steve Molaro confirmed to TVLine. With the guys being such huge fans of the franchise, Molaro said it would be weird for them to not mention the film. They're not sure yet on how the film will play into a story line, but it won't be ignored.

The Big Bang Theory guys will be taking a physics-themed road trip, according to EW.com's Spoiler Room. The guys will travel to Mexico in the van of the late theoretical physicist Richard Feynman.

Finally, TVLine reported earlier this month that Leonard's "other woman" had been cast. Melissa Tang, who recent had a recurring role on Chuck Lorre's Mom, will play Mandy, the woman Leonard admitted kissing during his North Sea expedition two years ago.