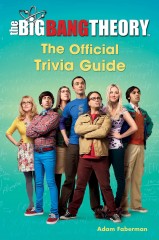 An authorized The Big Bang Theory trivia and quiz book is set for release next month. The Big Bang Theory: The Official Trivia Guide book was written by the show's script coordinator Adam Faberman. The book features 1,600 trivia questions, photos, and top quotes from the show, along with a complete episode guide.

This completely authorized Big Bang Theory trivia and quiz book is filled with questions from every season, photos, hilarious quotes, and more, including excerpts from the Roommate Agreement and your chance to play ‘Emily or Cinnamon.’ It’s sure to provide hours of fun and test the knowledge of even the most dedicated fan.

The Big Bang Theory is one of the most popular sitcoms in the world and the funniest show on TV. It is beloved by critics and audiences alike for its quick wit, incredibly geeky but relatable characters, and its science and science fiction storylines. But up until now, there has never been an official Big Bang Theory book.

The book is due to be released Tuesday, October 27 from Touchstone Books.