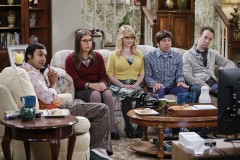 The ninth season premiere follows on from the eighth season finale which saw Amy tell Sheldon she needed a break from their relationship, while Leonard and Penny's plans to elope to Vegas were in question when he admitted kissing another woman during his North Sea expedition.

In the premiere episode, "The Matrimonial Momentum", Leonard and Penny arrive in Vegas to get married but Leonard's shock admission is still weighing on Penny. Meanwhile, Sheldon is in a state of flux after Amy called time on their relationship.

For our UK and European visitors, we have teamed up with 8Ball.co.uk, who stock a large selection of officially licensed The Big Bang Theory t-shirts along with tees inspired by Sheldon's wardrobe, to give fans ten percent off Big Bang clothing.

Use the promo code BBT10 to get 10% off The Big Bang Theory merchandise at 8Ball.co.uk