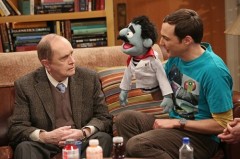 Veteran comedic actor Bob Newhart will reprise his role as Professor Proton/Arthur Jeffries in a December episode of The Big Bang Theory. This will mark the fourth appearance of Bob Newhart, who first guest starred in the sixth season episode "The Proton Recurrence".

Newhart last appeared on The Big Bang Theory in the seventh season episode "The Proton Transmogrification", in which Arthur passed away. On the day of Professor Proton's funeral, which fell on the May 4th - "Star Wars Day", Sheldon had a dream in which Professor Proton returned to him as a Jedi to offer him some sage advice.

Professor Proton's Star Wars-inspired return, which is set to air Thursday, December 17, will come just hours before the much anticipated new film, Star Wars: The Force Awakens, opens in theaters.