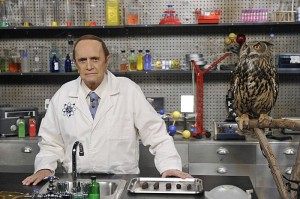 Hot off his cameo appearance on Monday night's series debut of Young Sheldon, Bob Newhart will be returning to The Big Bang Theory as Professor Proton later this season.

Comedy legend Bob Newhart first appeared in the sixth season as Sheldon and Leonard's childhood hero, Arthur Jeffries, who hosted a children's science show as Professor Proton. Newhart won the first Emmy award of his career for his appearance in "The Proton Resurgence".

Arthur Jeffries passed away in the Season 7 episode "The Proton Transmogrification". Since then his character has appeared to Sheldon in dreams as his "Obi-Wan". Newhart most recently appeared in the Season 9 episode "The Opening Night Excitation", helping calm Sheldon's nerves ahead of his first intimate night with Amy.

Newhart will guest star in the November 2 episode - the show's first episode back on Thursday nights - which has not been taped yet. Sheldon's nemesis-turned-friend Wil Wheaton will also appear in the episode.