After Penny runs into Zack at a bar, she and Leonard are invited to dinner on his boat where Zack and his wife ask them for an unusual favor. Meanwhile, Raj tries to patch things up with Anu. 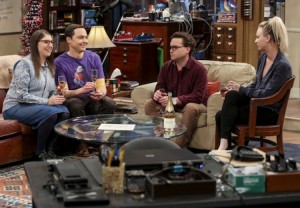 1211 - The Paintball Scattering
Next Episode

Bernadette: This is so great. Why don't we do it more often?
Amy: Because you have two kids, I have Sheldon, and Penny's apparently in the gym all the time, 'cause damn, look at her!
Bernadette: Yeah, so impressive how you manage to bounce back after having no babies.
Penny: Ah, another reason why we don't do this more often.

Leonard: Well, apparently, Zack sold his company for a ton of money and retired.
Sheldon: And that bothers you?
Leonard: I don't know. I mean I guess so. Yeah. It doesn't seem fair. I work hard.
I'm really smart. I've made substantial contributions to my field. But Zack gets to be rich, while I'm still working for a paycheck?
Sheldon: Well, a lot of people you don't know are rich. That doesn't seem to bother you. Mark Zuckerberg, Sultan of Brunei, Gordon Letwin.
Leonard: Who's that?
Sheldon: He's one of the first 11 employees of Microsoft.
Leonard: Yeah, well, I don't have to hang out with Gordon Letwin.
Sheldon: Well, that's too bad. He helped create the HPFS file system. Oh, the stories he could tell.

Zack: Hey, you and Leonard should come over and have dinner with us on our boat.
Penny: Yeah, that would be so nice.
Bernadette: Leonard was just saying how he was hoping to have dinner with one of your ex-boyfriends on his expensive boat.
Zack: Well, then this worked out perfect!

Penny: Thank you, but you shouldn't have spent so much.
Zack: Nah. It's cool. I sold my company for a boatload of money. And then I bought a boat. Then I got married. Guess where.
Amy: On your boat?
Zack: No, but that would've been awesome!

As Penny, Bernadette and Amy drink at a bar, Bernadette wonders why they don’t this more often. When a waiter comes to their table with a bottle of champagne from a guy at the bar, Amy wonders if by drinking it they are promising a guy anything. Penny insists they’re not going to do anything. Penny’s ex-boyfriend, Zack, comes over to explain he sent the bottle of champagne. Zack mentions he recently sold his company for a boatload of money, then bought a boat and got married. Zack invites Leonard and Penny to come for dinner on the boat sometime.

Meanwhile, Sheldon, Leonard, Howard and Raj are playing Dungeons and Dragons back at the apartment. As the guys mock Raj for spying on Anu and wrecking his relationship, Howard offers some constructive advice and tells Raj to apologize and try patch things up with Anu.

When Penny arrives home as Leonard is tidying up game night, she says she had a fun night and mentions running into Zack. When Penny tells him that Zack got married, he says that’s nice. When Penny mentions that he sold his company for a fortune and retired, Leonard is less enthusiastic. Penny wonders if he’s jealous of Zack, but Leonard says Zack should be jealous that he’s with her.

When Anu gets a notification from her doorcam app, she looks at the video feed and sees Raj holding up cardboard signs trying apologize to her. Raj explains he’s winning her back Love Actually style, a film she’s unfamiliar with. When she answers the door, Raj tells Anu he knows they both made mistakes. After saying he’s sorry for spying on her and knows it’s not okay, he asks if she wants to apologize to him. Anu reminds him that he also said he didn’t trust her. Anu questions why he wants to marry her if he doesn’t know her, arguing that Raj is afraid of missing out as all his friends marry. After Raj claims she’s also afraid that she wasted years dating the wrong people, Anu accepts it’s not different. Raj is happy they finally agree on something, until Anu says that’s why they shouldn’t see each other anymore.

As Leonard drives Sheldon to work, he mentions how Zack sold his company for a ton of money and has retired. Sheldon wonders why this bothers Leonard. Leonard argues he works really hard, is smart and has made substantial contributions to his field, yet he’s still working for a paycheck. Sheldon points out a lot of people Leonard doesn’t know are rich and that doesn’t bother him. Leonard points out he doesn’t have to hang out with those people, but Penny has agreed to have dinner with Zack on his boat.

In Howard and Bernadette’s kitchen, Raj can’t believe that Anu doesn’t want to marry him after one mistake. When Howard says Anu wasn’t right for Raj and that he dodged a bullet, Bernadette tells him he shouldn’t say that as he will look like jerk when they get back together. Raj tells them he thinks Anu is right that he only wants to get married because his friends are and he doesn’t want to be left out.

On Zack’s boat, “Off the Menu”, Zack and Marissa tell Leonard and Penny how they met. Leonard asks if they’re going to take the boat out tonight, but Zack says it’s a little choppy out there. After Marissa and Zack go get drinks for their guests, Penny admits that she can’t believe Zack’s rich and is jealous of him. Leonard says he was trying to pretend not to be so she wouldn’t think he was petty, but he’s relieved to find out they’re both petty. After Zack and Marissa return, they explain they had a reason for inviting Leonard and Penny tonight: they want to have a baby but Zack is infertile. As Marissa says that Zack has always admired Leonard as the smartest person he knows, Penny tries to stop them before they say something awkward. Zack comes right out and asks Leonard if he’d be the father of their baby.

Penny is surprised when Leonard says it’s really flattering and he doesn’t know what to say. After Leonard says he and Penny should talk about this, Zack and Marissa tell them to take as much time as they need … as they sit there watching them. When Penny points out they would like to talk privately, Zack and Marissa go downstairs and leave them to it.

In Raj’s apartment, he gets a video call from his father who demands to know if Raj really did install a camera to spy on his fiancee. After Raj admits there’s some truth to the story, Dr. Koothrappali tries to paint Anu as the bad guy so her parents will pay him back for the wedding deposits. When admits this is all his fault and he wishes he’d handled it better, Dr. Koothrappali offers to call Anu’s parents and try straighten things out if he still wants to get married. Raj doesn’t think Anu will want to marry him and he says she deserves someone better. Dr. Koothrappali tells him to stop being so hard on himself as he’s a good man and he deserves happiness. He tells Raj to figure out what he wants and if that means cancelling the wedding, that’s fine.

In the apartment, Penny tells Bernadette and Amy how Leonard reacted to Zack’s request. Bernadette sees why Leonard would be flattered, but Penny thinks it’s creepy. Amy concedes she wouldn’t let someone use Sheldon’s sperm. When Bernadette asks if Leonard is really considering doing this, Penny says they got in a huge fight about it. Leonard argued that if Penny wasn’t interested in having his baby, why shouldn’t somebody else be able to. Amy and Bernadette can see why Leonard would have a biological drive to pass on his genes.

Over in Apartment 4B, Leonard tells Sheldon about Zack’s request as they play video games. Sheldon is intrigued that Zack asked him to be a sperm donor, wondering why they didn’t come to him as he can eat cheese without clearing out a room. When Leonard admits he doesn’t get why Penny’s so against this, Sheldon thinks she might be worried he hasn’t considered the emotional toll of knowing there’s a child out there’s who’s biologically his but not actually his. Leonard thinks that’s insightful, but Sheldon’s still puzzled why Zack didn’t come to him as he’s taller than Leonard and doesn’t have asthma.

As Anu folds laundry, her doorbell app pings and she watches Raj pleading to talk to her. Anu answers the door and tells Raj he’s just making this harder. Raj accepts she was right, he did get engaged for the wrong reasons. He tells her she deserves to be proposed to by someone who doesn’t want to spend a single day without her, not because he wants to catch up with his friends. When Anu says she’s not going to marry him, Raj says he’s not asking her to. He likes her and wants to start at the beginning, not in the middle. Raj asks if she will go out on a date with him, but she doesn't know. Raj pulls out a small card saying “Please” and Anu accepts.

When Penny returns home, Leonard apologizes for their fight and says he recognises this is a really unusual situation. Leonard tells her if she doesn’t want him to do it, he won’t because they’re a team and are in this together. After Penny says she’ll be right back, she returns with a “sample cup.”  Leonard asks if this means she’s okay with this. Penny says Leonard didn’t get a say in her decision not to have kids, so maybe she doesn’t get a say in this. When Penny concedes that Zack couldn’t have picked a better person, Leonard wants her to tell that Sheldon.