After Barry Kripke reveals that Dr. Pemberton plagiarized his thesis in college, Sheldon and Amy debate whether to expose the fraud. Meanwhile, Bernadette tells Howard about the worst thing she ever did to get something she wanted.

1220 - The Decision Reverberation
Next Episode 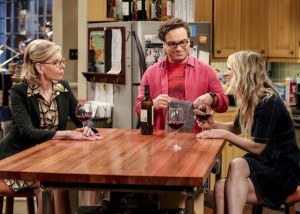 Sheldon: Are you all right? You seem distracted.
Amy: Yeah, sorry. I'm just trying to figure something out.
Sheldon: Is it what to get me for our anniversary? 'Cause I'll give you a hint: it's already in my Amazon basket. Just click "buy now." I filled out the gift card for you. Apparently, I'm the light of your life.

Amy: I don't know, Barry. It sounds a little sleazy.
Barry Kripke: Well, let me know if you change your mind. Sleazy is where I thrive.

Howard: So what's the worst thing you've ever done to get something you wanted?
Bernadette: I'm not gonna tell you that.
Howard: Oh, come on. I'll tell you mine.
Bernadette: Right, 'cause yours is gonna be as bad as mine. Okay. [chuckles]

When Campbell and Pemberton stand up to leave the table, Pemberton says he’s glad they hashed things out and may the best team win. As Pemberton and Campbell walk out of the dining hall, Barry Kripke calls out to Pemberton, who explains they went to college together. When Kripke goes over to Sheldon and Amy’s table, he admits he hates Pemberton and considers him a grade A weasel. Kripke says Pemberton’s M.O. was to take other people’s ideas and turn them in as his own. After Sheldon says that’s what Pemberton’s doing with them, Kripke isn’t surprised and claims that Pemberton even plagiarised his thesis. Kripke offers to get them proof if they want it, as he really doesn’t want Pemberton to win a Nobel.

As Sheldon and Amy leave their apartment, he mentions he was talking to his mom about the Pemberton and Campbell situation. Mary was conflicted, saying Old Testament God would bring down his wrath on them for being deceitful, while New Testament God would forgive them. Amy wonders if they couldn’t bring down their own wrath on them and then ask New Testament God to forgive them. Sheldon admits he already asked his mother that, and she accused him of being full of California sass.

When Sheldon and Amy go over to the apartment, Sheldon explains he and Amy are wrestling with an ethical question: If they have damaging information about someone, should they keep it to themselves or expose them? Amy explains that Kripke says Pemberton plagiarised his thesis and he can prove it. Penny doesn’t think it’s fair to use something someone did in school against them, but Bernadette thinks cheaters should be held accountable no matter how long ago it was. Howard disagrees, but Leonard thinks it’s questionable whether a cheat should have a career he didn’t earn. After Sheldon wonders why this is such a hard decision, Raj says maybe because he wants to win but knows this is a dishonorable way to do so.

As Howard and Bernadette climb into bed, she says Sheldon and Amy deserve to win and sometimes you’ve got to do what you’ve got to do. Bernadette scoffs at Howard’s suggestion it’s better to take the high road. When Howard asks what’s the worst thing she’s done to get what she wanted, Bernadette initially doesn’t want to say. She eventually admits that when they first met, there was another waitress at the Cheesecake Factory who thought he was cute so she told her that he had all the hepatitises. Howard wonders who it was when Bernadette lets slip she still works at the Cheesecake Factory.

As Leonard and Penny get ready for bed, Leonard admits he can’t believe Sheldon isn’t going to expose Pemberton as he loves telling on people who broke the rules. Penny is proud of Sheldon and Amy for trying to win on their own merits, but Leonard worries that Sheldon and Amy might not win as their competitors have done such a good job associating their name with the theory of super-asymmetry. When Penny says it’s not their decision to make, Leonard says it could be. He argues that just because Sheldon and Amy don’t want to expose Pemberton, it doesn’t mean someone else can’t. Penny is surprised Leonard would do that, but he insists they deserve the Nobel and he’s not going to let two frauds steal it from them.

After Leonard collects the incriminating evidence from Barry Kripke’s office, he runs into Amy in the corridor. Leonard looks very guilty and mumbles nonsense as Amy says hello. Meanwhile, as Howard and Raj sit down at a table in the cafeteria, Howard mentions there was a waitress at the Cheesecake Factory back in the day who had a crush on him. Raj is disturbed by how much Howard remembers about all the waitresses.

As they drink wine at the kitchen counter in the apartment, Amy tells Penny that her husband was acting weird earlier. Amy thinks Leonard was acting like he was guilty. Penny isn’t surprised, saying Leonard has “resting guilt face”. As Penny rambles, Amy wonders why she’s acting guilty now. Penny comes clean and admits that Leonard went to Kripke to get the information on Pemberton. Penny says it means she didn’t do anything wrong and now she won’t risk losing to those idiots, but Amy feels she is implicated now she knows what Leonard’s done.

In their apartment, Sheldon notices Amy is distracted when he compliments her cooking. After Sheldon wonders what’s up, Amy asks Sheldon if he would want to know whether someone was going to do something ethically murky on his behalf. Sheldon argues that now he knows there is a thing to know, he has to know.

When Sheldon and Amy go over to Leonard’s apartment to confront him, Sheldon tells him he knows what he’s going to do and he said he doesn’t want to do it. Leonard insists they’re not doing anything wrong if he takes care of the dirty work. Sheldon insists it’s still wrong, but Leonard argues them not getting the recognition for their discovery is also wrong. Amy insists they don’t want Leonard compromising his integrity for them.

When Howard goes to see Bernadette in their bedroom, he tells her he did something stupid today. He explains he went to the Cheesecake Factory to try to figure out who that waitress was. Howard says he didn’t find out because he came to the realization he didn’t care. After Howard says he doesn’t need outside validation when the best woman in the world already loves him, Bernadette reveals that the manager already called because Howard creeped a lot of people out.

As Sheldon and Amy dine with Drs. Pemberton and Campbell, Amy tells them there’s something they have to give them. Sheldon hands Campbell the proof that Pemberton plagiarised his thesis. When Pemberton asks if they’re blackmailing them, Amy says they’re doing the opposite. Sheldon explains they’re giving them the proof so that nobody can use it against them because they want to win the Nobel on their own merits. Campbell is stunned that the allegations against Pemberton are true. Campbell points out that his name is attached to Pemberton’s, so if this gets out it ruins him too. Campbell says Pemberton’s ex-wife was right that he’s always looking for shortcuts. After Campbell and Pemberton start bickering about the stalled divorce, Campbell admits he’s in love with Pemberton’s ex-wife. After Pemberton throws a drink at him, Campbell tackles Pemberton to the floor.

A drunk Campbell comes to Sheldon’s office as he and Amy eat lunch. Campbell says someone - him - published he information about Pemberton, who lost his job as a result. Getting uncomfortable, Amy tells Campbell he needs to go. Before he leaves, Campbell proposes the three of them work together. After Campbell points out that Pemberton has been saying a lot of bad stuff about him, that is also true, Amy closes the door on him.