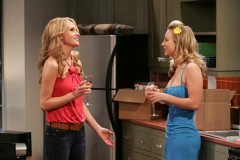 Sheldon is horrified to learn a new resident is moving into the apartment above theirs. When the guys meet their new neighbor, Alicia, Sheldon has no objections and Leonard, Howard and Raj are soon paying her a lot of attention, much to the chagrin of Penny, who feels Alicia is just using the guys.

218 - The Work Song Nanocluster
Next Episode

Wolowitz: Penny, let me take this opportunity to point out that you are looking particularly ravishing today.
Penny: Not with a thousand condoms, Howard.
Wolowitz: So there is a number.

Penny: Leonard, and Howard, and Raj, they aren't like other guys. They're special.
Alicia: Okay, they're special, and?
Penny: Well let's see how can I explain this. Um. They don't know how to use their shields.
Alicia: Shields?
Penny: Yeah. You know like in Star Trek and you're in battle, and you raise the shields.
*Realizing what she said* Where the hell did that come from?

Sheldon: Please. We're facing a far more serious problem than stray arachnids.
Leonard: It's not so bad.
Sheldon: Not bad? It's horrible. You hear stories about this things, but you never think it'll happen to you.
Leonard:So they steamed your dumplings. Get over it.

Howard: Enough with the guilt, ma. We'll still see each other. I'll come over every night and have dinner with you.
Mrs. Wolowitz The hell you will! What am I running here, a fancy restaurant? Does this look like the Olive Garden?

Sheldon: You set it on DTS, didn't you?
Leonard: I had to, she called me cutie.

When Penny mentions the people in the apartment above Sheldon and Leonard's are moving out, Sheldon is horrified at the thought of new neighbors. Howard decides he wants to take the apartment, allaying some of Sheldon's concerns but striking fear in Penny. After an argument with his mother, Howard decides to stay at home.

Sheldon and Leonard return home and find the moving boxes of their new neighbor, Alicia. Leonard is again smitten with his attractive new neighbor, but first Sheldon has some questions. Sheldon quizzes her about how noisy she'll be in the apartment above and ultimately offers no objection to her moving in. Penny is "dressed like a slob" when she meets Alicia and is uncomfortable with another attractive woman in the apartment building.

When Penny comes looking for Leonard, Sheldon tells him he's upstairs with the other guys helping Alicia set up her stereo. Penny is not impressed by the lengths to which the guys are going to impress Alicia. Penny decides to play Alicia at her own game and shows up at her apartment dressed to kill. Penny's feelings of jealousy towards Alicia only heighten when she finds out Alicia has been acting for three months and has already had more success than her.

A dejected Penny returns to Sheldon's apartment and tries to talk through her feelings about Alicia as Sheldon watches a documentary on bees. When Sheldon comments on new queen bees in a hive, Penny wonders whether she feels threatened by Alicia. Sheldon was only talking about bees, not giving her advice. Later, Penny tries to win the guys back by buying them dinner. When Alicia turns up in need of a ride, the guys leave Penny and the food behind.

Alicia and Penny clash in the laundry room when Penny accuses her of using the boys. When Alicia levels the same accusation at Penny, they start fighting and tumble into the hallway just as the guys arrive home. Penny ends up with a black eye, while Alicia lands a part on CSI.