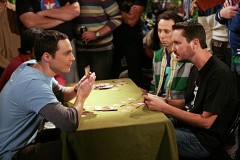 When Raj and Sheldon enter a Mystic Warlords of Ka'a tournament at Stuart's comic book store, Sheldon gets the opportunity to settle an old score with his nemesis, Star Trek: The Next Generation's Wil Wheaton. Meanwhile, Leonard regrets a pact he once made with Wolowitz when he must ask Penny to set him up with one of her friends.

304 - The Pirate Solution
Next Episode

When Sheldon finds out that Wil Wheaton will be playing in the Mystic Warlords of Ka'a tournament at the comic book store, he reveals that Wil is on his all-time enemies list.

Sheldon: It might also interest you to know that Wil Wheaton currently ranks sixth on my all-time enemies list, right between director Joel Schumacher, who nearly destroyed the Batman movie franchise, and Billy Sparks, who lived down the street from me and put dog poop on the handles of my bicycle.

Wolowitz: Puppies, how do you stand on puppies?
Bernadette: A puppy once bit my face!
Wolowitz: Of course it did.

Wil Wheaton: Did that guy just say "Revenge is a dish best served cold" to me in Klingon?

Leonard: Can I have a napkin.
Sheldon: I'm sorry, no!
Leonard: But you have a whole bunch of napkins.
Sheldon: Yes, I've moved to a four napkin system, lap, hands, face, and personal emergency. If you like, starting tomorrow, I'll add a guest napkin but I'm afraid there's nothing I can do for you today.
*Leonard grabs a napkin.*
Sheldon: Good luck, that's the face napkin.

After the guys play Mystic Warlords of Ka'a, Howard reminds Leonard of a pact they made back in 2004 that if one of them gets a girlfriend, they would have her introduce the other to one of her girl friends. The next day, Howard is still nagging Leonard about the pact. Meanwhile, Raj tells the guys about a Mystic Warlords of Ka'a tournament at the comic book store with a $500 grand prize. Although Raj wants the money, Sheldon isn't interested.

After they've just had sex, Leonard raises his & Wolowitz's girlfriend pact with Penny. Penny is not thrilled with the idea of introducing somebody she knows to the creepy Howard. Elsewhere, Sheldon finds out that his nemesis Wil Wheaton is signed up for the Mystic Warlords tournament. Sheldon explains to Raj and Stuart how he idolized Wil Wheaton until he failed to show at Star Trek convention which Sheldon traveled across the country to attend. Sheldon teams with Raj and joins the tournament for the chance to confront his nemesis.

Leonard, Penny and Howard drive to pick up Penny's friend, Bernadette. When she joins them in the car to go on their date, Howard struggles to make small talk with Bernadette. At the comic book store, Sheldon and Raj are in the early rounds of the tournament as Sheldon vows to reach the final and defeat Wil Wheaton. On their date at the restaurant, Howard is finding it hard to make conversation with Bernadette, that is until his mother calls. The pair soon bond over their controlling and intrusive mothers.

Sheldon and Raj face Stuart and Wil Wheaton in the final round of the tournament. When Sheldon has Wil Wheaton cornered and is set to win the game, he reveals how his admiration of turned to animosity. Wil Wheaton explains that he missed the convention because his grandmother had died. Once Sheldon throws the match and concedes defeat to Wil Wheaton, he reveals this was a lie.