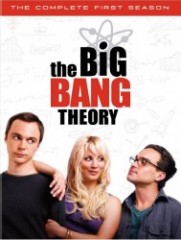 Enjoy the complete first season of The Big Bang Theory all over again on DVD. All seventeen episodes of the show's premiere season and a behind-the-scenes featurette are presented on this three-disc box-set.

In The Big Bang Theory's first season, Penny, an attractive waitress and aspiring actress, moves into the apartment across the hall from geeky physicists Sheldon and Leonard. Penny soon becomes a part of their social group, which includes the equally geeky engineer Howard Wolowitz and astrophysicist Raj Koothrappali.

Leonard is quickly smitten with Penny and his desire to start a romantic relationship with her would form the overarching plot of the show's first season. Leonard and Penny would go on their first date in the season finale.

The Big Bang Theory's first season aired between September 24, 2007 and May 19, 2008. Only seventeen episodes were produced, due to a strike by the Writers Guild of America. The Big Bang Theory was renewed for a second season in February 2008. The show ranked #68 in the ratings for the 2007/08 season.