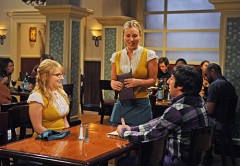 Melissa Rauch promoted to semi-regular star
Melissa Rauch has joined the cast of The Big Bang Theory as a semi-regular, according to the Ausiello Files. The actress plays Bernadette, Howard's girlfriend, and has so far appeared in 7 episodes of the show. While Rauch won't necessarily appear in every episode, she will be appearing more often this season.

Evil Wil Wheaton returns
Wil Wheaton is to guest star in the November 11th episode of The Big Bang Theory. This will be the Star Trek: Next Generation actor's third appearance on the show as his evil self. Mayim Bialik (Amy) will also appear in the episode.