Quite a few Official Big Bang Theory T-Shirts have been released recently and we want to show you a few of them today. There have been some great new designs launched recently. 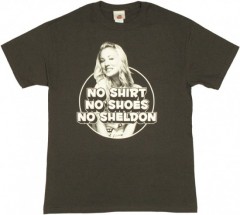 This charcoal t-shirt is the first to feature only Penny. The shirt reads "No Shirt. No Shoes. No Sheldon.", a reference to the time Penny refused to serve Sheldon after he had banished her from the guys' apartment in The Panty Pinata Polarization. Now available at StylinOnline.com and also in female/junior size. 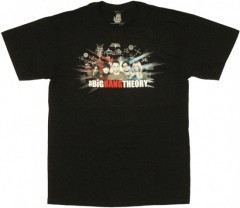 This black t-shirt features the whole gang above the show's logo with scientific symbols in the background. This is the third official t-shirt to feature the entire gang. Availabe now from StylinOnline.com and in female/junior size, and as a hoodie.

Universe of All Women T-Shirt

This officially licensed white t-shirt features Howard's Venn diagram of the Universe of All Women. The shirt refers to a discussion between Leonard and Howard in The Psychic Vortex, where Howard drew Leonard a Venn diagram featuring all the women of the universe, the women he wants to sleep with, the women who believe what he believes, and the women who would sleep with him. Available now from StylinOnline.com.

We hope you enjoyed this recap of the latest Big Bang Theory shirts. You can view all of the official t-shirts in our clothing area.