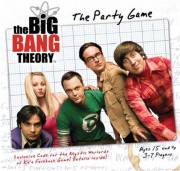 Cryptozoic Entertainment have recently released The Big Bang Theory: The Party Game. The game features almost 300 cards, 60 points game tiles and is suitable for 3-6 players. Each game lasts for about 30 minutes and is appropriate for players aged 15+.

In the game players compete to pair category cards with show insider phrases and references. In each round of the game, one player serves as the Referee, while other players submit card combinations which they feel best describe the category. The game also features special Bazinga! cards to add an element of surprise to gameplay.