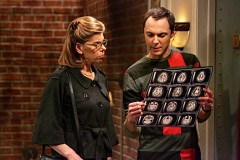 Christine Baranski (The Good Wife, Cybill) is set to reprise her role as Leonard's mom on The Big Bang Theory this season, TVLine reports in an exclusive story.

According to TVLine's Michael Ausiello, Baranski will be appearing in the October 10 episode of The Big Bang Theory. This marks her first appearance since the show's fifth season premiere. Her character will again be appearing by Skype. Baranski's commitments on The Good Wife, which is filmed in New York City, make it difficult for her to appear in-person.