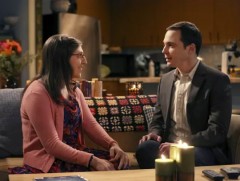 The final round of our tournament to find fans' favorite episode of The Big Bang Theory has now closed. The winning episode was The Opening Night Excitation, which saw Sheldon and Amy's take on a physical dimension as the guys enjoyed the premiere of the new Star Wars movie. The Opening Night Excitation received 52.3% of the votes against The Adhesive Duck Deficiency with 47.7% in the final round.

In The Opening Night Excitation, Sheldon decides he and Amy should consumate their relationship on her birthday, even if it means missing the new Star Wars movie. Penny and Bernadette help prepare Amy for her big birthday surprise, while Leonard, Howard and Raj wonder whether the new Star Wars movie will live up to their expectations.