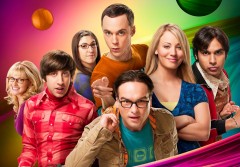 The Big Bang Theory's renewal follows the recent series order for a The Big Bang Theory spin-off, Young Sheldon, which will focus on a nine-year-old Sheldon growing up in Texas. The single-camera comedy is being produced by TBBT co-creator Chuck Lorre and showrunner Steven Molaro. Jim Parsons will be providing narration as the adult Sheldon.

The Big Bang Theory's five original cast members are already signed up to return with Mayim Bialik and Melissa Rauch expected to sign deals soon. According to press reports, the five original stars took a paycut to free up money for Bialik and Rauch, who both joined the show in its fourth season, and who have been on lower pay cycles.