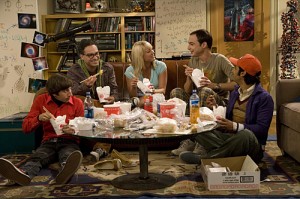 The Big Bang Theory will sign off in May 2019 after its upcoming twelfth season, CBS and Warner Bros. announced today.

The world's number one comedy will have become the longest-running multi-camera sitcom in TV history when the series finale airs next year. With a final season of twenty-four episodes starting next month, the show will ultimately have produced 279 episodes since it began in 2007.

"We are forever grateful to our fans for their support of The Big Bang Theory during the past twelve seasons. We, along with the cast, writers and crew, are extremely appreciative of the show's success and aim to deliver a final season, and series finale, that will bring The Big Bang Theory to an epic creative close", Warner Bros. Television, CBS and Chuck Lorre Productions said in a joint statement.

The Big Bang Theory's final season will premiere with a special broadcast on Monday, September 24 at 8/7c on CBS. There's another brand new episode that week as the show returns to its regular night time period on Thursday, September 27 at 8/7c.