CBS has unveiled its Fall 2017/18 schedule today at its Upfront presentation in New York City. The Big Bang Theory will once again start the season on Monday nights while CBS airs Thursday Night Football matches, before moving back to its regular Thursday night home in November. Along with an eleventh season of The Big Bang Theory, CBS will also be airing a new spin-off series, Young Sheldon, which focuses on the early life of Sheldon Cooper growing up in Texas.

The Big Bang Theory's eleventh season will premiere Monday, September 25 at 8/7c on CBS. The show will air its first five episodes of the season on Monday nights while CBS airs NFL Thursday Night Football. On Monday nights, CBS's line-up with include the new sitcom 9JKL (except for September 25) at 8:30, returning sitcom Kevin Can Wait at 9/8c, new sitcom Me, Myself and I at 9:30, and the returning drama series Scorpion at 10/9c. The Big Bang Theory will return to its regular Thursday night time period of 8/7c from November 2. 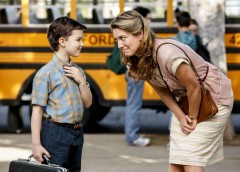 For 9-year-old Sheldon Cooper (Iain Armitage), it isn't easy growing up in East Texas. Being a once-in-a-generation mind capable of advanced mathematics and science isn't always helpful in a land where church and football are king. And while the vulnerable, gifted and somewhat naïve Sheldon deals with the world, his very normal family must find a way to deal with him. The Big Bang Theory's multiple Emmy Award winner Jim Parsons narrates as Adult Sheldon. This single-camera, half-hour comedy gives us the chance to meet Sheldon in childhood, as he embarks on his innocent, awkward and hopeful journey toward the man he will become.

And in a final piece of good news for The Big Bang Theory fans, CBS chief executive Les Moonves said today at the Upfront that he hoped the show's recent two season renewal would not be its last. Moonves mentioned Everybody Loves Raymond as an example of a hit show which could have stayed on the air longer than it did.