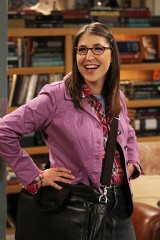 The Big Bang Theory and its star Mayim Bialik were today announced as nominees for two awards at the Critics' Choice Awards.

The Big Bang Theory is nominated for the Best Comedy Series award and is up against ABC's Black-ish, Netflix's GLOW, Amazon's The Marvelous Mrs. Maisel, ABC's Modern Family, and Amazon's Patriot. This is The Big Bang Theory's fifth nomination for the award, which it won in 2013.

Mayim Bialik was nominated for for the Best Supporting Actress in a Comedy Series award. Her fellow nominees are The Marvelous Mrs. Maisel's Alex Borstein, GLOW's Betty Gilpin, Black-ish's Jennifer Lewis, Master of None's Alessandra Mastronardi, and One Day at a Time's Rita Moreno. This is Mayim Bialik's fourth nomination for the award, which she won in 2016.

The 23rd Annual Critics' Choice Awards will air live on The CW on Thursday, January 11 at 8:00 ET/PT.