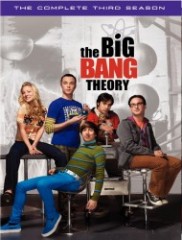 Enjoy the complete third season of The Big Bang Theory all over again on DVD. All twenty-three episodes of the third season are presented with new bonus features on this three-disc box-set.

The Big Bang Theory's third season begins as the guys return from their three month expedition to the Arctic. After Sheldon learns that Leonard, Howard and Raj tampered with his evidence, he flees back to Texas. Sheldon quickly feels uncomfortable at home with his religious mother and returns to Pasadena. Up on Leonard's return from the Arctic, he and Penny are quick to begin a relationship. Their relationship continues through most of the season, ending when Leonard tells Penny he loves her - a situation not helped by the interference of Wil Wheaton.

Sheldon and Penny's strange friendship would continue to grow through the season, with Sheldon coming to the aid of an injured Penny and later his valiant attempts to teach her a little physics. Howard meets Bernadette Rostenkowski during the third season, with both of them bonding over their overbearing and interfering mothers. Howard and Bernadette continued to date even after Howard proposed in the early stage of their relationship. Bernadette abruptly broke things off with Howard towards the end of the season, though the reason wasn't revealed until next year.

In the third season finale, Sheldon reluctantly goes on a blind date after Howard threatens him with a dirty sock. Sheldon's blind date was with Amy Farrah Fowler, a neurobiologist whose Internet dating profile matched the one Howard and Raj set up for Sheldon without his permission. When Amy reveals she is only there because she has an agreement with her mother to date once year and that all forms of physical contact, up to and including coitus, are off the table, Sheldon offers to buy her a beverage.

The Big Bang Theory's third season contained twenty-three episodes aired between September 21, 2009 and May 24, 2010. For its third season, The Big Bang Theory moved to the Mondays at 9:30 slot on CBS, following the then-#1 sitcom Two and a Half Men. The show grew in popularity and finished the season as the #12 ranked show on TV.