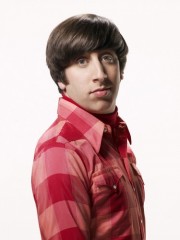 Howard's second cousin Jeanie, the girl with whom he lost his virginity, will be making an appearance in a November episode of The Big Bang Theory, according to a TVLine.com exclusive report. Tensions will rise further between Howard and Stuart, who is currently living with Howard's mother, when Stuart arrives at a party with the aforementioned Jeanie.

Kara Luiz, who has recently guest starred in Amazon Instant Video's Betas, will be playing the role of cousin Jeanie.

Howard accidentally admitted to losing his virginity to his second cousin in "The Adhesive Duck Deficiency" when Leonard, Raj and Howard camped out under the stars and ate cookies made by VW Microbus-driving teachers wearing tie-dyed Grateful Dead t-shirts. On his with date with his now-wife Bernadette in "The Creepy Candy Coating Corollary", Howard admitted to losing his virginity in a Toyota Corolla.

Read the full TVLine.com story for all the details.