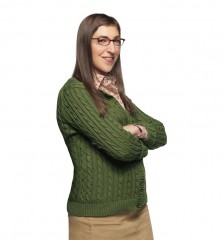 Following six consecutive nominations for Lead Actor in a Comedy Series, Jim Parsons did not receive a nomination this year. Jim Parsons has won the award four times over the past five years. The Big Bang Theory, which had been nominated for Outstanding Comedy Series in each of the past four years, was also off the list this year.

The 67th Annual Primetime Emmy Awards will be hosted by Brooklyn Nine-Nine's Andy Samberg and will air live on FOX on Sunday, September 20 at 8/7c.