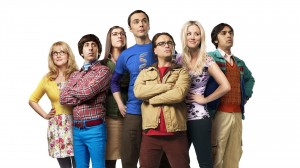 We are running an episode tournament to find fans' favorite episodes from the latest season of The Big Bang Theory. The first knock-out round has now closed and the four most popular episodes have made it through to the semi-finals.

In the previous round, The Long Distance Dissonance won against The Gyroscopic Collapse with 62.7% of the vote, The Birthday Synchronicity beat The Brain Bowl Incubation with 72.4%, The Cohabitation Experimentation was the winner against The Conjugal Conjecture with a 64.5% share, and The Veracity Elasticity defeated The Hot Tub Contamination with 74.3% of the votes.

The four winning episodes now go head-to-head in the following pairs: The Long Distance Dissonance vs. The Cohabitation Experimentation, and The Birthday Synchronicity vs. The Veracity Elasticity. Each match lasts for two days and the first match is open for voting now. Remember to check back on Friday, June 16 to vote in the second match.

Cast your votes in the second round of our The Big Bang Theory: Season 10 Episode Tournament