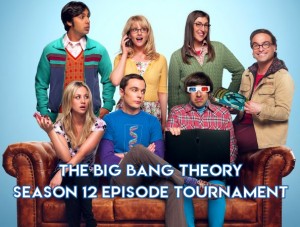 The nominations round has just closed and the eight most popular episodes have made it through to the first of the knock-out rounds.

The episodes now go head-to-head in the following pairs: "The Stockholm Syndrome" vs. "The Imitation Perturbation", "The Change Constant" vs. "The Conjugal Configuration", "The D & D Vortex" vs. "The Maternal Conclusion", and "The Wedding Gift Wormhole" vs. "The VCR Illumination".

The first match between "The Stockholm Syndrome" and "The Imitation Perturbation" is open now. Check back on Sunday, June 9 to vote in the second match.

Cast your vote in the first round of our The Big Bang Theory: Season 12 Episode Tournament