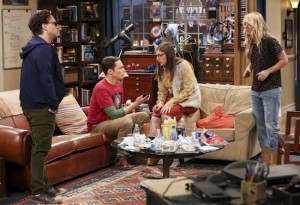 Sheldon and Amy await big news, on the series finale of The Big Bang Theory.

1222 - The Maternal Conclusion
Next Episode

Amy: Oh. That's me. Hello? Yes, this is Dr. Fowler. I see. Okay, thank you. We won.
Penny: Congratulations!
Leonard: Oh, my God!
Sheldon: We did it.
Amy: I know. Can you believe it?
Sheldon: That's a good point. What if I'm dreaming? [Leonard slaps Sheldon] We won the Nobel Prize!

Penny: So, I guess the only thing that actually stays the same is that things are always changing.
Sheldon: Interesting. So you're saying the inevitability of change might be a universal constant.
Penny: Well, there's a little more to it than that, but, yeah, sure.

Amy: It's weird. I don't really feel different, but I guess our lives will never be the same.
Sheldon: Oh, I don't know. We're going to work like always. I still put my pants on both legs at a time.
Amy: One day that's gonna end very badly.

Penny: Well should we wake him up?
Leonard: Well, he did say if he fell asleep, we were allowed to slap him awake.
Penny: Oh, boy.
Leonard: Wait a minute. Why do you get to do it?
Penny: 'Cause I called it.
Leonard: Well, you can't just call it. You have to earn it.
Penny: Oh, and you've earned it?
Leonard: No one has earned it more than me. [Amy clears her throat] You have your whole life to smack him around. This is my time.

Sheldon: It's happening! [phone chimes] Unknown caller. It's got to be them.
Amy: Okay, put it on speaker.
Sheldon: Hello?
Amy: Hi.
Barry Kripke: Hello. This is Sweden calling. Is this Dr. Cooper and Dr. Fowler?
Sheldon: Yes.
Amy: Yeah.
Barry Kripke: Congratulations. It is my pleasure to inform you that you've won the Nobel Prize in being suckers!

In the apartment at 2:45 am, Sheldon is singing about the half-life of radium to the tune of “99 Bottles of Beer on the Wall”. After Sheldon insists he doesn’t need caffeine to stay awake for news from the Nobel committee, he falls asleep. When Penny asks whether they should wake him up, Leonard excitedly recalls that Sheldon said they were allowed to slap him awake. Leonard decides he should be the one to have the pleasure of slapping Sheldon. Unfortunately, Sheldon’s phone rings and he wakes up before Leonard gets the opportunity.

When Sheldon answers the call from an unknown caller, it turns out to be a prank call from Barry Kripke. The phone rings again and it’s Howard checking to see whether they’ve heard anything yet. As they wonder what to do to pass the time, Amy’s phone rings. When she gets off the phone, she tells Sheldon they won. As Leonard and Penny congratulate them, Amy asks if Sheldon can believe it. Sheldon says that’s a good point and wonders if he’s dreaming. Leonard suddenly slaps Sheldon, prompting him to realize he really has won a Nobel prize.

As Sheldon and Amy walk down the stairs of the building, he asks her how it feels to be married to a Nobel prize winner. Amy says you tell me. Sheldon’s phone buzzes with a series of congratulatory text messages from his family. Amy finally gets a text, confirming her prescription is ready to pick up. Amy tells Sheldon it’s weird, she doesn’t feel different but she knows their lives will never be the same. Sheldon isn’t sure since they’re going to work like always and he still puts his pants on two legs at a time. When Sheldon and Amy leave the building, a horde of reporters are waiting for them. Amy tries to answer their questions, but Sheldon panics and runs back inside the building.

In the university cafeteria, Leonard is telling Howard and Raj about how he slapped Sheldon. When President Siebert comes to talk to them, he tells them that the press will be reaching out to Sheldon and Amy’s family and friends for comment and he wants them all to be on the same page. The word they’ve chosen to describe the Nobel prize-winning pair is quirky. When Sheldon and Amy arrive to a round of applause, Amy is grateful but a flustered Sheldon walks away again.

When Howard walks by Sheldon’s office, he finds a visitor knocking on Sheldon’s door. The guy explains he’s a reporter who has an appointment to interview Sheldon. Howard goes into Sheldon’s office and finds him hiding behind his desk, shaking his head. Howard returns to tell the reporter that Sheldon’s not there, but if he’d like to talk to him, he’s Sheldon’s best friend in the whole world and an astronaut.

As Raj walks down a corridor at the university, he hears sobbing coming from the women’s bathroom. After Raj knocks on the door and asks if everyone’s okay in there, Amy tells him to go away. When Raj walks in and asks what’s wrong, Amy explains she just saw a picture of herself on the Internet and she thinks she looks terrible. Amy knows she shouldn’t care how she looks and she never thought she did, but she wonders if she’s really that frumpy. Raj insists Amy is a beautiful woman, but he says if she’s not happy then she could make some changes like getting a new haircut, new clothes or new glasses. Amy fears that sounds expensive, but Raj points out the Nobel comes with a substantial cash prize. After Amy decides to get a new haircut, Raj invites her to go shopping in Beverly Hills.

After Howard goes into his kitchen, Bernadette asks why this article about Sheldon is all about Howard. After Bernadette questions why it says Howard is Sheldon’s best friend, Howard claims to have saved Sheldon whenever he “got into scrapes" but Bernadette doesn’t buy it. Howard mentions that the reporter asked if he could put him in touch with Amy’s best friend. Bernadette argues that’s Penny, but Howard says it doesn’t have to be.

As Leonard makes tea in the apartment, Sheldon wonders what kind of tea is appropriate for someone who has just won a Nobel prize but feels unmoored from reality as everything is changing. Sheldon admits this is something he’s wanted his whole life, but he never considered how everything would be different. Leonard tells Sheldon he knows this all feels overwhelming right now, but he promises things will settle down. After Raj knocks on the door, Amy walks into the apartment with a new haircut and stylish new clothes. Leonard says she looks amazing. When Amy asks Sheldon what he thinks, he tells her he liked her better the way she was. Amy declares she likes the way she looks, but Sheldon storms out after saying he doesn’t.

In the hallway, Leonard tells Sheldon that was rude. Sheldon argues Amy is the one constant he can count on and now she’s changing. Leonard points out it’s just a haircut and some new clothes, but Sheldon says it’s the last straw and he can’t take any more change. With a ding, the elevator doors open to reveal Penny, who says they finally fixed the elevator.

After Penny steps out of the elevator, Sheldon declares the situation a nightmare and runs down the stairs. When Penny wonders what’s wrong, Leonard explains that Sheldon just won a Nobel and his wife looks amazing. After Sheldon races down the stairs, he is shocked to reach the lobby and find Penny waiting for him.

Back in the apartment, Amy says she should have seen this coming. Raj tells her she’s allowed to get a haircut. Leonard tells her to focus on the positive: she won a Nobel prize and he slapped Sheldon; a lot of dreams came true today. Amy accepts this is a big day for her and she’s allowed to enjoy it without worrying about how it’s going to affect her husband.

At the Cheesecake Factory, Sheldon tells Penny that all this change is just too much. Penny says he’s the only person who could win the biggest prize in science and still feel bad about it. Penny tells him that even though he goes on and on about wanting things to stay the same, he’s changed a lot since she met him: he has lots of friends, a wife, has moved into a new apartment, and has had sex. Penny argues the only thing that stays the same is that things are always changing. Sheldon notices the TV is showing Howard and Bernadette being interviewed on CNN. When Bernadette claims to be Amy’s best friend, Penny decides to get a stronger drink.

Back in the apartment, Amy declares she is done tiptoeing around Sheldon. Raj thinks they’re all guilty of it. Leonard says he’s done enabling Sheldon with his spot on the couch, his control of the thermostat even though he doesn’t live there, and his insistence that Leonard not touch the helix structure in the corner of the room. After Leonard decides to try move the structure, it falls apart and dumps dozens of little balls across the floor.