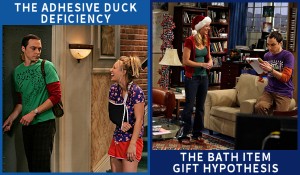 We are running an episode tournament to find fans' favorite episode of The Big Bang Theory. The third round has just closed and the two winning episodes have made it through to the final round.

In the last round, The Adhesive Duck Deficiency beat the series finale, The Stockholm Syndrome, with 57.3% of the vote, while The Bath Item Gift Hypothesis was the clear winner against The Bow Tie Asymmetry with 71.3% of votes.

The final round between The Adhesive Duck Deficiency and The Bath Item Gift Hypothesis is open now. Check back on Tuesday, September 17 for the result.