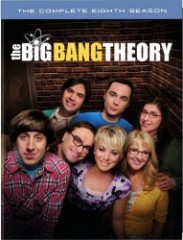 In The Big Bang Theory's eighth season, Leonard and Penny move towards marriage, Sheldon and Amy take a few steps forward in their relationship - until Amy decides she needs time out, Raj continues his most serious relationship yet with Emily, and Bernadette helps Howard come to terms with the death of his mother.

After four months riding the rails, Sheldon's cross-country train journey is cut short when he's robbed on a sleeper train. After Sheldon calls him, Leonard drives out to Arizona with Amy to pick him up. When Amy is angry that Sheldon didn't call for her help, Sheldon admits that he didn't want her to know he couldn't make it on his own.

When the girls decide to recreate their proms on the roof of the apartment building, Sheldon agrees to partake in all traditional prom festivities. As Sheldon learns about prom customs, he worries Amy will be expecting something to happen between them on the night of the prom. When Sheldon backs out of going to the prom after seeing Amy in her dress, she follows him to his room where he says he's having a panic attack. After Amy threatens to go to prom alone, Sheldon comes out to tell her he really did think she looked pretty in her dress. As Sheldon explains his worries about prom night, Amy says she's always hoping something will happen with them, but she just wants to have an enjoyable prom. When Amy tells Sheldon there's something she wants to say to him, but he shouldn't feel like he has to say it back, Sheldon interrupts to say he loves her, too.

Despite Sheldon's resentment at being forced to celebrate Christmas, Amy and Sheldon exchange gifts and are both delighted with the presents they're given. Sheldon and Amy deal with Sheldon's jealousy when Amy helps Barry Kripke with a project, and Amy's anger when Sheldon signs up for a Mars colonization project without talking to her first. When Sheldon is left out a physics symposium, Amy suggests they spend the night building a blanket fort in the living room. Sheldon and Amy have so much fun that Sheldon loosens the terms of the Relationship Agreement to let Amy stay over.

When Sheldon interrupts their anniversary date night to talk about a TV series, Amy is angry that he isn't paying attention to her. A few days later, when Amy finally contacts Sheldon by video chat, she tells him being his girlfriend is emotionally and physically challenging, and she needs time away from him to reevaluate their relationship. Sheldon is taken aback and, after Amy ends the video chat, he turns to his Gollum figure to ask what he should do with this engagement ring.

This season, Leonard and Penny adjust to life as an engaged couple and tentatively start to plan their wedding. Leonard and Penny discuss moving in together, but Sheldon's dependence on Leonard and his aversion to change held them back. Sheldon agrees to let Leonard spend one night a week at Penny's. Leonard and Penny's roles in the relationship change with Penny making good money in her new job as a pharmaceutical sales rep. They even try new things in the bedroom after Leonard stops buy an adult store and buys a body paint kit.

When Sheldon pushes Leonard and Penny to set a wedding date, they begin to consider their wedding even though they don't think there's any rush. On the spur of the moment, tells Leonard that she's free tonight and Vegas isn't that far away. Leonard says he's in, so the couple drive to Vegas. On the way there, Leonard reveals to Penny that during his North Sea expedition, he kissed another woman. Although she isn't happy about the revelation, Penny tells Leonard she thinks they can past this, so they carry on driving to Vegas.

With Stuart living at Mrs. Wolowitz's house following the fire at his comic book store, Howard grows increasingly irritated at what he sees as somebody else mooching off his mother. Bernadette thinks Howard is overreacting, until Stuart brings Howard's cousin as his date to the prom.

When Stuart's comic book store is ready to re-open, Bernadette tells Howard he should be happy that Stuart will be able to stand on his own two feet again. Instead, Howard is angry that his mother gave her old furniture to Stuart to use in the store. On the night of the store's grand re-opening, Howard receives the shock news that his mother passed away while on vacation in Florida.

Bernadette has been at her husband's side as he deals with the loss of his mother. When the airline misplaces Mrs. Wolowitz's ashes, Bernadette shows her intimidating side to make sure they are found. Howard and Bernadette move into Mrs. Wolowitz's house, where Stuart is still living, and start to renovate the house.

Raj's relationship with Emily hits a bump in the road when Emily and Penny meet for the first time. Penny thinks Emily is cold to her and, when Penny stops by Emily's office to try her pharmaceutical sales pitch with a real doctor, Penny asks Emily if she doesn't like her. Emily admits she's uncomfortable around Penny given her history with Raj and their night together. Despite Raj's attempts to patch things up between the ladies, they both later admit they don't like each other.

When Raj is left alone in Emily's apartment, he takes the opportunity to snoop around Emily's apartment, inadvertently breaking one of her dresser draws. After Emily returns home, the couple have the first fight of their relationship. Emily gets her own back by suggesting there's something in her closet that Raj shouldn't see, playing on her dark side.

The Big Bang Theory's eighth season began with an hour-long premiere on Monday, September 22, 2014 and contained twenty-four episodes which aired between September 2014 and May 7, 2015. The first six episodes of the season aired on Monday nights to make room for Thursday Night Football. The show returned to its regular Thursday night slot on November 6, 2014.

During the eighth season, The Big Bang Theory continued its reign as the number #1 sitcom on U.S. TV, although its ratings fell from the previous season.