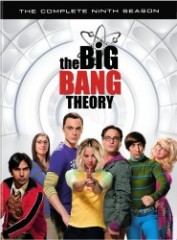 In The Big Bang Theory's ninth season, Sheldon and Amy deal with the aftermath of their break-up before reuniting and taking a big step forward in their relationship, Leonard and Penny adjust to married life, Howard and Bernadette get the welcome news that she's pregnant, while Raj's relationship with Emily takes a break when he falls for another woman, only for him to start dating both women at the same time.

Following their break-up, Sheldon and Amy have to come to terms with still seeing each other now they've separated. Sheldon's repressed feelings about Amy come to the surface when he's interviewed for a documentary about Spock. Realizing his feelings for Amy are stronger than he would let himself admit, Sheldon goes over to Amy's apartment to ask her to get back together, only to see her kissing another guy.

When Sheldon calls Amy to give away his tickets to the aquarium's Thanksgiving show because nobody else wants to go with him, Amy suggests they go together as friends. After spending the day together, Sheldon is happy that they're able to hang out together again. When Amy calls Sheldon to say she may be ready to be his girlfriend again, Sheldon turns her down because of how difficult he's found getting over her.

After Sheldon is driven crazy by a song that's stuck in his head, he finally comes to the realization that the song is "Darlin'" by The Beach Boys and it's stuck in his head because it reminds him of his relationship with Amy. Sheldon rushes over to Amy's apartment to get back together with her, interrupting her date with a guy who seems more interested in idolizing Sheldon than dating Amy.

After Sheldon learns that Amy's birthday clashes with the premiere of the new Star Wars movie, Professor Proton appears to Sheldon and helps him decide to skip the movie and spend the day with Amy. Penny and Bernadette are surprised to hear that one of Sheldon's ideas for Amy's birthday present is coitus. Amy, who learns about Sheldon's plans, is more than happy with her planned gift. After their big night together, Sheldon and Amy both say they enjoyed it more than they thought they would. Sheldon tells her he's looking forward to her next birthday when they do it again.

Penny is upset following Leonard's admission that he kissed another woman during his North Sea expedition, but she decides they should still get married in Vegas. Following the ceremony, Penny reveals that she is bothered by Leonard kissing another woman. Leonard's attempts to assuage Penny only make matters worse when he reveals he still works with the other woman. Leonard and Penny return home and spend their wedding night in separate apartments.

After Leonard speaks to Mandy, the woman he kissed during his expedition, he comes to realize that he might have been trying to sabotage his relationship with Penny by telling her about the kiss. Leonard admits that even after all these years he still sometimes feels like he doesn't deserve Penny, while she admits she also worries about him leaving her. They reconcile to stop being so scared of losing each other. After Sheldon reacts poorly to Leonard and Penny's decision to live together, the pair decide not to make any drastic changes and instead split their time between Apartment 4A and 4B.

After Bernadette and Howard's big news, Penny admits she sometimes thinks about starting a family, though she's in no rush. On a weekend getaway to a cabin in Big Bear, Sheldon spills the beans on Leonard's secret bank account, which angers Penny who actually makes more money than Leonard. During their fight over Leonard's secret, Penny admits she isn't happy with her job but plans to keep it as it's the grown-up thing to do.

When Beverly Hofstatder visits Pasadena, Penny grows tired of Beverly's snipes and criticism of her. Beverly finally admits that she was hurt by Leonard and Penny's decision to elope to Vegas and not invite her to the wedding. To patch things up, Penny offers to have another small wedding ceremony while Beverly is still in town.

Howard is upset when Bernadette wants to redesign the house he grew up in. Eventually, Howard agrees to let Bernadette redesign the dining room. When Bernadette's father, Mike, helps Howard out with the redesign, Howard's surprised to hear that Bernadette said he was the one who didn't want kids. When Howard and Bernadette discuss it, Howard promises that if they did have a kid he would do more of the work around the house, as he would like the chance to be the kind of father he never had.

After a rabbit they were nursing back to health on Valentine's Day bites Howard on the nose, Bernadette decides it's not the right time to tell him she's pregnant. When Bernadette does tell Howard, his joy quickly gives way to panic as he realizes how difficult raising a child will be. Howard quickly recognizes that he'll need to earn more money in order to take care of a child. Soon, Howard and the guys have the idea of patenting their work on supercooled helium and quantum vortices and licensing it for use in guidance systems.

Raj's long-term relationship with Emily hits a snag when Raj meets an attractive woman at the comic book store. When Raj breaks up with Emily just before Valentine's Day in order to ask Claire out, he's disappointed when he finds Claire just got back together with her boyfriend and doesn't want to date a guy who'd dump his girlfriend on Valentine's Day.

Stephen Merchant (The Office [UK]) had a recurring role as Dave, a man who Amy dates following her break-up from Sheldon. Dave has a fascination with the great Dr. Cooper and seems rather pleased when Sheldon interrupts his date with Amy to win her back. Tesla Motors and SpaceX founder Elon Musk appeared as himself in "The Platonic Permutation".

Bob Newhart reprised his role as the late Professor Proton, appearing again to Sheldon in a dream as his "Obi Wan", in the Star Wars-themed episode "The Opening Night Excitation", which also featured Wil Wheaton. Malcolm in the Middle star Jane Kaczmarek guest starred as a psychiatrist who rebuffs Penny attempts to pitch pharmaceuticals in "The Sales Call Sublimation". June Squibb guest starred as Sheldon's Meemaw, Constance, in "The Meemaw Materialization".

Batman's Adam West appeared as himself in the 200th episode of the season, "The Celebration Experimentation". In the episode, Sara Gilbert made her first appearance as Leslie Winkle since Season 3, while Christine Baranski and Wil Wheaton also guest starred. Brian Thomas Smith reprised his role as Zack Johnson, Penny's former boyfriend (and husband), in "The Fermentation Bifurcation".

Christine Baranski returned as Dr. Beverly Hofstadter in "The Line Substitution Solution", where her anger about missing her son's wedding causes Penny to promise a redo ceremony. In the season finale, "The Convergence Convergence". Judd Hirsch (Taxi) guest starred as Leonard's father and Beverly's ex-husband, Dr. Alfred Hofstadter, in town for the redo wedding. Christine Baranski and Laurie Metcalf also guest starred in the episode.

The Big Bang Theory was renewed for its ninth season as part of a three-season deal in 2014.