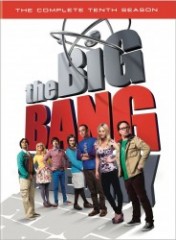 In The Big Bang Theory’s tenth season, Sheldon and Amy’s relationship strengthens when they move in together, only to be challenged by the reappearance of somebody from Sheldon’s past. Leonard and Penny have a second wedding ceremony and adjust to a new living situation when they finally live alone as husband and wife. Howard and Bernadette welcome the birth of Halley and struggle to return to work after their parental leave. Raj is single again and tries to get back on the dating scene while his lifestyle takes a hit after he cuts himself off from his father’s money. Meanwhile, Sheldon, Leonard and Howard must work together on their guidance system for the Air Force.

After Amy’s apartment is flooded, she convinces Sheldon to experiment with living together. To make sure the results won’t be influenced by living in an environment he’s comfortable with, Sheldon proposes living in Penny’s apartment across the hall. Despite his initial discomfort, Sheldon settles in easily on their first night together, but Amy is kept awake by Sheldon’s sleep talking and hogging of the blanket. The next day, Amy wants to call off the experiment but Sheldon points out they wouldn’t be very good scientists to stop after only twelve hours of data. Amy agrees to continue living with Sheldon.

Living together, Sheldon’s desire to control every aspect of their lives quickly grates on Amy, causing their first argument as a cohabiting couple. Sheldon eventually agreed to compromise with Amy by not forcing her to follow a bathroom schedule and sharing a toothbrush holder with her. When Amy’s apartment is complete, she lies to Sheldon about the state of the repair work so they can continue to live together. Sheldon is initially angry about Amy’s deception, but soon admits he considers their experiment in cohabitation as success and agrees to stay with Amy in Apartment 4B.

When Amy is offered a research fellowship at Princeton for the summer, she is unsure if she can leave Sheldon for three months. After Amy finally tells Sheldon, he insists she must go and tries to be a supportive boyfriend for her, leading to their first non-Birthday coitus.

While Amy is in New Jersey, Ramona Nowitzki - the grad student who had a huge crush on Sheldon - returns to Caltech and starts spending a lot of time with Sheldon. Amy and her friends try to make Sheldon see that Ramona is interested in being more than a friend, but Sheldon doesn’t agree. When Sheldon finally asks Ramona if she’s seeking a romantic relationship, she suggests she might be. As a result, Sheldon immediately flies to New Jersey to propose to Amy.

Leonard and Penny have a second wedding ceremony for their friends and family who are in town. Penny’s mother, Susan, worries what Leonard’s family will think of hers, although everybody is instead talking about whether Alfred and Mary spent the night together. After the ceremony goes off without a hitch, Leonard and Penny are pleased that their families are heading home without incident.

Leonard and Penny adjust to their new-found freedom when Sheldon moves out of the apartment to live with Amy. When Penny starts moving Leonard’s collectibles into storage to make the place feel more like her home, Leonard agrees to let Penny start making changes to the apartment. Leonard and Penny’s first Christmas alone together leads to a fight over a Netflix binge and an troublesome tree.

When Penny feels like Leonard is no longer making an effort in their relationship, she goes on a spa weekend without him. Leonard travels to the spa to make things right and they both agree that Sheldon should write up a relationship agreement for them. After Leonard and Penny agree to take Raj in when he gives up his apartment, Leonard's mother claims their need for a roommate is a sign of problems in their marriage.

Leonard starts to feel like a third wheel when Penny enjoys some girl time with new roommate Raj. When Penny is offered a job by her ex-boyfriend Zack, Leonard is upset that Penny would consider working for an ex.

As Bernadette’s due date approaches, Bernadette worries about being sidelined at work and that she isn’t feeling very maternal yet. Meanwhile, Howard is concerned that he is not ready to be a dad yet, leading to an expensive shopping spree for baby items. In the final weeks of her pregnancy, Raj and Stuart fight over who can be the most helpful third wheel. After Bernadette and Howard go to the hospital for the second time, after arriving too early the first time, Bernadette gives birth a baby girl who they name Halley.

Back home with their baby, Bernadette struggles to sleep and nurse Halley, fearing her baby doesn’t love her. As the end of her maternity leave approaches, Bernadette is conflicted about whether to return to work. She feels there’s no good option: either be guilty about leaving Halley or give up a career she’s worked so hard for. Bernadette and Howard both struggle to leave Halley in daycare.

Raj is single again after his relationships with Claire and Emily fizzled out. When he meets a cleaner at the university, he lies to his friends about her job and jeopardizes his relationship with her. In a bid to find out why he keeps ruining his relationships, Raj enlists the help of a council of his ex-girlfriends to figure out his problem.

When Raj father claims he’s spoiled and that’s why he can’t meet a woman, Raj’s friends make him see how his father has been bankrolling his lavish lifestyle. Raj vows to stop relying on his father’s money and gives up his expensive apartment. After Raj moves in with Leonard and Penny, his closeness with Penny bugs Leonard. Raj eventually rents a room from Bert, the geologist.

Dean Norris (Breaking Bad) guest starred in five episodes this season as Colonel Williams, the Air Force representative who dealt with the guys for their quantum gyroscope project.

Brian Posehn guest starred as Bert, Amy’s geologist friend, in five episodes. Brian George returned as Raj’s father, Dr. Koothrappali, in two episodes. John Ross Bowie reprised his role as Barry Kripke in “The Geology Elevation” when Howard consulted Barry on whether his Stephen Hawking remote control toy was in poor state. In the same episode, Stephen Hawking made another appearance to help Sheldon deal with his feelings of jealousy.

Christopher Lloyd (Back to the Future) guest starred as Theodore, an unusual house guest who Sheldon rented out a room to in a bid to annoy Leonard and Penny, in “The Property Division Collision”. Vernee Watson returned as Nurse Althea in “The Birthday Synchronicity”.

Laura Spencer (Emily), Kate Micucci (Lucy), Alessandra Torresani (Claire) and Katie LeClerc (Emily) returned in “The Emotion Detection Automation”, when Raj convened a meeting of his ex-girlfriends to find out why he can’t maintain a relationship.

Brian Thomas Smith returned as Penny’s ex-boyfriend, Zack, in “The Cognition Regeneration”. Riki Lindhome reprised her role as Ramona Nowitzki, the grad student who had a huge crush on Sheldon, in "The Long Distance Dissonance".

During its tenth season, The Big Bang Theory was again the most-watched and highest-rated scripted program on U.S. television. CBS renewed The Big Bang Theory for another two seasons in March 2017, taking the show through to its twelfth season in 2018/19.