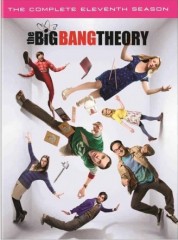 In The Big Bang Theory’s eleventh season, Sheldon and Amy plan a wedding, Howard and Bernadette deal with the surprise news of another pregnancy, Leonard and Penny wonder whether they should be taking a big step forward too, and Raj finds new self-confidence as he keeps searching for the one.

After Amy accepts Sheldon’s proposal, Sheldon decides to stay with Amy in Princeton for a few days. After Sheldon spends the entire evening talking about himself, he and Amy have their first argument as an engaged couple. Sheldon vows to try be better at sharing the spotlight with her.

As Sheldon and Amy start to plan their wedding, they use decision theory to limit the stress of choosing between their competing visions for the big day. After they begin to question each other’s decisions and make deliberately provocative choices, they decide to have a simple wedding at City Hall. As they wait their turn, Sheldon changes his mind and decides he wants a first dance with Amy at a real wedding.

When Amy sees Sheldon obsessively tying and untying his bow tie the day before their wedding, Amy tells him it doesn't need to be even because sometimes a little asymmetry looks good. On the day of the wedding, Sheldon stops his mother from trying to straighten his bow tie, saying it's supposed to be a little asymmetrical. When Mary comments that sometimes it’s the imperfect stuff that makes things perfect, Sheldon has a flash of inspiration and rushes to see Amy. Sheldon and Amy’s wedding is delayed as they excitedly work on a new theory of “super asymmetry”.

After Sheldon reminds the guys about the time they mined Bitcoin without him, the guys go on a quest to find their suddenly valuable missing cryptocurrency. They realize the currency is on a laptop which Leonard gave to Penny when they dating, which she then gave to her ex-boyfriend Zack. After Leonard and Penny go to Zack's apartment, he shows them a seven-year-old video that Penny recorded on the laptop soon after she broke up with Leonard. Leonard is touched by the video which shows a drunk Penny lamenting the break-up of her relationship with him.

When Leonard receives a braggy Christmas letter from his brother, he feels bad about how little he and Penny have achieved in the past year. Leonard wonders if he and Penny should be thinking about the next step after two years of marriage, like buying a house or having a baby. Penny tells him she wants to do all those things someday, but she has a bunch of stuff she would like to do first.

When Bernadette tells Howard that she is expecting again, he is once again floored with fear about raising another child, particularly when he learns it’s a boy. Howard, who isn't athletically inclined, worries he will not be able to relate to a son who might one day expect his dad to be the stereotypical father. Despite his best attempts to get out of it, Howard has a vasectomy to avoid any future surprises and is placed on bed rest, joining his pregnant wife at home.

After the birth of Michael, Howard and Bernadette are unsure who should stay home with the kids. Howard decides to look after the kids one day to show he has what it takes to care for them. While Bernadette falls back in love with her job on a trip to the office, Howard is quickly tired and realizes he might not have what it takes to be a stay-at-home dad. Howard and Bernadette realize neither them is ready to give up their job.

Raj starts seeing Bernadette’s co-worker, Ruchi, who warns him she wasn’t interested in a serious relationship. When she feels things are getting too serious, Ruchi breaks things off. Raj briefly gets entangled in another couple’s messy break-up when he starts dating Nell and then befriends her ex-boyfriend, Oliver.

When Raj decides to apply for a job hosting shows at the Griffith Planetarium, he realizes he is low on self-confidence. Raj decides he needs some time away from Howard, who he feels is constantly putting him down. Ultimately, Raj gets the job and patches things up with Howard, whose feelings were hurt by the sudden break-up.

Riki Lindhome reprised her role as Ramona Nowitzki in the season premiere, “The Proposal Proposal”. Stephen Hawking also made his final appearance in that episode.

Regina King reprised her role as Janine Davis in “The Retraction Reaction”. Bob Newhart returned as Arthur Jeffries in “The Proton Regeneration”. Dean Norris reprised his role as Colonel Williams in “The Tesla Recoil”. Brian Thomas Smith returned as Zack in “The Bitcoin Entanglement”. Brian George guest starred as Raj’s father, Dr. Koothrappali, in “The Confidence Erosion”. Joshua Malina reprised his role as President Siebert in “The Monetary Insufficiency”.

Microsoft co-founder Bill Gates made a cameo appearance in “The Gates Excitation”. Author Neil Gaiman appeared as himself in in “The Comet Polarization”.

The Big Bang Theory’s eleventh season featured twenty-four episodes broadcast between September 2017 and May 2018. The show started the season on Monday nights with its season premiere on September 25, 2017, before moving back to Thursdays on November 7. The season finale aired May 10, 2018.