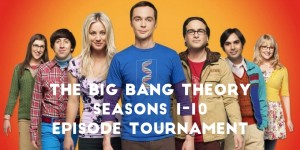 We are running an episode tournament to find fans' favorite episodes from Seasons 1-10 of The Big Bang Theory. The nominations round has closed and now the sixteen most popular episodes battle it out in the first knock-out round.

The sixteen episodes will go head-to-head in the following pairs: The Bath Item Gift Hypothesis vs. The Locomotive Manipulation, The Adhesive Duck Deficiency vs. The Staircase Implementation, The Opening Night Excitation vs. The Birthday Synchronicity, The Long Distance Dissonance vs. The Barbarian Sublimation, The Panty Pinata Polarization vs. The Herb Garden Germination, The Earworm Reverberation vs. The 43 Peculiarity, The Prom Equivalency vs. The Luminous Fish Effect, and finally The Scavenger Vortex vs. The Gorilla Experiment.

The first match is open for voting now. Remember to check Monday for the second match after which there will be a new match every other day. The second knock-out round will open on Monday, July 31.