About The Big Bang Theory 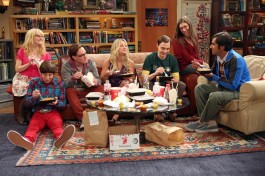 The Big Bang Theory was an American sitcom from Chuck Lorre Productions and Warner Bros. Television that ran for twelve seasons on CBS.

The Big Bang Theory was centered on physicists Sheldon Cooper and Leonard Hofstadter, whose geeky and introverted lives were changed when Penny, an attractive waitress and aspiring actress, moved into the apartment across from theirs. Penny quickly became a part of Sheldon and Leonard's social group, which included the equally geeky engineer Howard Wolowitz and astrophysicist Raj Koothrappali. The group later expanded to include Howard's wife Bernadette Rostenkowski-Wolowitz and Sheldon's wife Amy Farrah Fowler.

The Big Bang Theory was originally developed for the 2006/07 season, though the series did not get picked up. The pilot was markedly different from the version which would eventually go to series. Only Jim Parsons and Johnny Galecki were part of the original pilot, which featured a much tougher character in the role that would morph into Penny.

When the show was redeveloped for the 2007/08 season, Kaley Cuoco, Simon Helberg and Kunal Nayyar were cast in the new roles of Penny, Howard and Raj, respectively. The retooled show was picked up by CBS in May 2007 with a thirteen-episode order for the 2007/08 season. The network gave the show the 8:30 time slot on CBS's popular Monday night comedy block, sandwiched between How I Met Your Mother and Two and a Half Men.

The Big Bang Theory was renewed for another three seasons in March 2014, taking the show through to its tenth season in 2016/17. During The Big Bang Theory's seventh season, the show ranked as the top-rated scripted program on U.S. television, overtaking CBS drama NCIS. Before production on the eighth season of the show began, the five original cast members all signed new contracts to return to the show for the next three years. Mayim Bialik and Melissa Rauch had already signed new contracts in September 2013.

After CBS won the rights to air Thursday Night Football matches between September and November 2014, the network made the decision to move The Big Bang Theory to Monday nights for the start of its eighth season. Six episodes of the eighth season aired on Monday between September 22 and October 20. The show moved back to its regular Thursday night time period on October 30. Although The Big Bang Theory's ratings fell year-to-year during its eighth season, the show remained the #1 sitcom on U.S. TV.

The Big Bang Theory returned for its tenth season on CBS in the fall of 2016, starting the season on Monday nights at 8/7c because of Thursday Night Football. The tenth season premiere aired Monday, September 19, 2016 and the show moved back to its regular Thursday night time period from October 27, 2016. The tenth season finale aired Thursday, May 11, 2017.

In February 2019, CBS gave Young Sheldon a two season renewal, taking the show through to its fourth season in 2020/19.